Peru is at the epicentre of climate change. Dramatic increases in rainfall are washing away the soil and nutrients on the slopes that coffee grows resulting in lower yields each year.  That’s why working with farmer cooperatives to adapt to climate change is a crucial element of our partnerships.

The remarkable story of the Norandino (formerly CEPICAFE) coffee farmers’ cooperative in Sierra Piura in northern Peru, is the embodiment of that principle.

Norandino is a long-term partner, and we’ve bought their green coffee directly from them since 1997.  The cooperative’s crops were being devasted by the climate change in the region caused by deforestation.  In 2010, Cafédirect started working with Norandino to launch a pioneering project that involved planting trees and providing much-needed income for the community through carbon credits.

Carbon credits are permits bought by companies to offset their greenhouse gas emissions.   Each carbon credit equates to a tonne of carbon dioxide that the new trees will capture from the atmosphere.

The project is the first of its kind, and Norandino has become the first small producers’ organisation to trade in carbon credits, which provided immediate economic benefit to the local community.

How did deforestation cause climate change in the region?

An incredible 80% of the world’s coffee is grown by 25 million small-scale farmers, and each one of these farmers is at risk from the effects of climate change.  The situation is so bad that some parts of the world, associated with coffee farming for generations, that it may soon become unsuitable for coffee production altogether – potentially resulting in a shortfall in supplies to meet demand.

The Norandino cooperative is in the Piuran mountains, over 1,000 metres above sea level. The Choco community live 2,000 metres further up the mountain, and live in challenging conditions.   They are entirely dependent on what food they can grow for themselves and the community need huge quantities of wood to build homes, to cook and keep warm. Over many generations, this has resulted in deforestation, and once wood from local forests was depleted, two-hour trips at least once a day was required to collect wood. 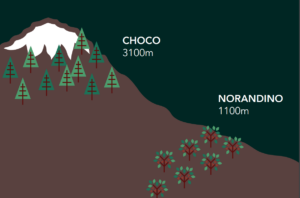 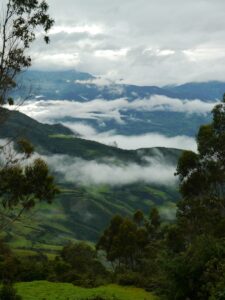 This deforestation contributed to acute climate change in the Sierra Piura region which had catastrophic consequences for the farmers at Norandino, who make a living from the small family plots of land. The 5,000 members grow the finest Peruvian coffee beans, cocoa and panela (cane sugar).  Membership of the cooperative provides strength in numbers, but each individual farm is very small and even the slightest decrease in crop yield or quality significantly reduces income.

The forest had protected the coffee farms on the mountain below by regulating rainfall and preventing excessive water from reaching farms whilst keeping the soil rich and fertile for planting coffee. With the trees gone, water washed the soil away which damaged crops, which led to mudslides, damaged infrastructure and even fatalities. 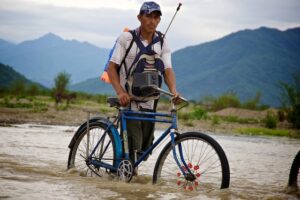 Cafédirect worked alongside Norandino to pilot an innovative climate change adaptation project. It was clear that reforestation of the area around Choco was key to protecting the farmers’ livelihoods but the trees needed to be protected against future deforestation. Working alongside our non-profit partner on the ground, Producers Direct, we gathered NGO expertise to help investigate the options available and resolved to use carbon credits to reward the Choco community for the planting of trees.

For every tonne of carbon captured by the new trees, the people of Choco receive a carbon credit that can be sold on the global carbon trading market, providing a rare source of income for their labour.  This involves planting seedlings and managing tree nurseries which the community own and can eventually sell as sustainably harvested wood. 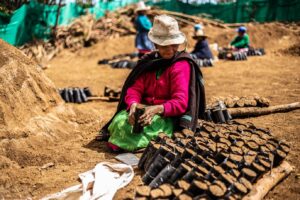 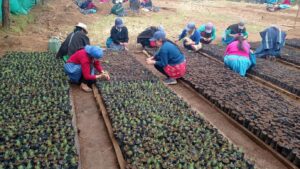 Cafédirect provided the startup finance for the project and in 2010 bought 5,092 carbon credits in advance for £55,000. In this innovative financing arrangement, credits were purchased before the trees absorbed carbon, allowing the project to be funded.

Progress so far and outcomes

From 2010 to 2021, 536 hectares have been reforested with 594,774 trees. This has resulted in 22,830 carbon credits being sold, achieving over half of their 2035 target of selling 42,784 carbon credits. The revenue generated from the sale of carbon credits is used for reforestation activities to continue expanding to new areas and generate further carbon credits for the community.

In the video clip link below, Santiago Paz, manager of the Norandino cooperative, explains how reforestation can help the community but also why carbon credits are so valuable today:

In 2017, the credits became Fairtrade certified, providing an additional €1.5 per tonne of greenhouse gas emissions.  So far, the Premium has been used for constructing a communal building, improving operations, and purchasing tools. 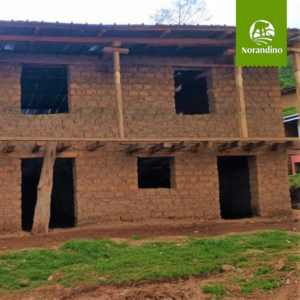 The Fairtrade Premium on carbon credits funded this community building

Necessary pruning of the forest creates waste that can be used by the community as a source of energy to cook and heat their homes and the wood resulting from thinning the trees can be used for construction. In time, they expect to be able to sell some of the wood created by essential tree thinning and after 25 years (2035), the trees will be commercially harvested by the communities.

As a Choco community member explains in the video link below, reforestation will provide income in the short and long run:

Norandino is already benefitting from the reforestation, with an improvement in crop quality and yields.  In 2015, Producers Direct set up a Centre of Excellence at Norandino. Here farmers visit Choco and are trained in the benefits of reforestation, agroforestry and carbon capture, to strengthen incomes and build climate resilience. 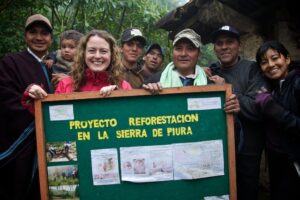 The Sierra Piura reforestation project has become a teaching model

This video clip shows Norandino cooperative farmer Herman Salvador explaining the benefits of the new forests on his farm and how the Centre of Excellence teaches other farmers about the benefits: 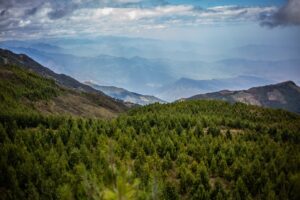 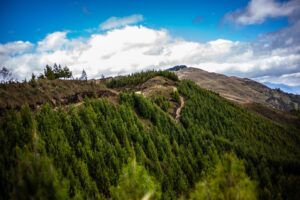 The new forests, planted by the Choco community

A blueprint for success

Reforestation programmes like this one demonstrate how carbon credits can be used innovatively to benefit communities affected by climate change.  This pioneering solution restored nature and brought economic benefits to the region by working with the Choco community and Norandino.

Cafédirect will continue to work with Producers Direct who are continuing with more landscape projects within Peru to enhance the strength and resilience of small-scale farms. Norandino’s Centre of Excellence continues to educate farmers on adapting to climate change and create long-term sustainable livelihoods.

Further information on the reforestation project in Sierra Piura can be found in the full case study.